flying noir is moving kitchens!
no shipping the week of april 19    ​
​current boxes are seasonal selections, details listed below:
no preservatives ... for optimal flavor please enjoy within 4 weeks
do not refrigerate, simply store in a cool, dry place
the 16pc grand box is now also part of the poetry & prose series
an example of contents:
andal   my own warm spice gathering - cinnamon, saffron & pimenton ahumado, Tahitian vanilla sea salt, a little Zaya rum - in 49% Maracaibo Creole dark milk ganache /
I studied bees, who were able to convey messages through dancing.
from Bees Were Better by Naomi Shihbab Nye

armagnac  Delord Napoleon fine Bas Armagnac in a sumptuous bittersweet, creamy ganache
...in place of flowers...  from I Explain a few Things by Pablo Neruda

Assamer  velvety caramel, dark milk ganache infused w Assam Gold Tips grown in the Himalayan foothills, topped w a disc of praslin made w the same tea
I read the tea leaves / as if they were words / left over from a
conversation / between two cups…
from “Lessons in Tea-Making” by Kenny Knight"

cococita  hints of coconut cream, housemade puree from mango, sudachi, kumquats & satsuma mandarins, and lastly the warmth of Kampot black peppercorns (Cambodia) in 49% dark milk chocolate
And there this weighty pearl of play became.
from Fruit of the Mind by William Burford

matzu  ceremonial green tea w hints of Japanese Roku gin in a creamy 36% white chocolate ganache
Only the cat, padding between the roses/ Shakes a branch and breaks
the chequered pattern/As water is broken by the falling of a leaf.
from The Garden by Moonlight  by Amy Lowell

rooiboser  a white chocolate truffle w praslin of caramelized rooibos, a red bush tea from South Africa -
no caffeine - complex notes of wood, honey and vanilla
Find yourself a cup; the teapot is behind you. Now tell me hundreds of things. Saki

sauvage  Grand Cru Sauvage 68% dark from the Beni province of Bolivia. This is wild criollo cacao, unique &  rare, gathered mostly by Chimane Indians who seek out the widely scattered cacao islands for ripe fruit, are well paid and have long term contracts for this treasured chocolate...Taste slowly: you will experience a marvelosity of lasting complexity and balance.
Love is the answer by John Lennon

satsumata  fresh satsuma mandarins, zested, caramelized. ground to crunchy praslin, in solid bittersweet
Held in a late season / At a shifting of worlds …
from A Reminiscence by Richard O. Moore

sinthe  Delord Napoleon Bas Armagnac & La Muse Verte absinthe in combo of 68% Cru Sauvage dark & 49% Maracaibo dark milk ganache w crunchy sugar shell
A farmer in a flat Gascon beret drops some of his best Armagnac into roughened palms and rubs them together before     plunging his nose into his hands and inhaling deeply...   Kate Ratliffe, Armagnac: The Autumnal Spirit and …gleaming, With a clear pale light, Was a flower who told me its name… from Dawn by Arthur Rimbaud


tomate  a savory bonbon! tomatoes, olive oil, chili, wild Sicilian oregano & West of Kentucky Bourbon from Sonoma CA, in a double shell of Cru Sauvage & outer coat of 49% Maracaibo Creole dark milk,Venezuela
...going to pick tomatoes, / would have to stop.
from Bent to the Earth by Blas Manuel de Luna

sava    slow cooked honey caramel w deep flavor of Tahitian vanilla & stray strands of mandarin zest
Did you ever stop to think, and then to start again?   from Winnie the Pooh by A.A. Milne

warmheart  fresh habanero infused ganache: 49% Maracaibo Creole dark milk chocolate w Pearson Ranch orange blossom honey - will not burn your tongue away!
Whereas under starlight the fireflies wink across East Coast grass and me I sit there painful in my silence glued to a bench in the midst of the American casual;    from Whereas by Layli Long Soldier

woo woo      sublime, tender ganache of 49% Maracaibo Creole dark milk chocolate w a measure of Woodford Reserve bourbon & fleur de sel
...whether it’s memory or loss / we’re in need of most: to remember / the way home or forget / who we are when we get there.
​                from “True Confessions” by Angie Estes

mostly enrobed in 68% Cru Sauvage, wild chocolate from the Beni province of Bolivia
the band for this box? handpainted/printed by the chocolatier
wishing you the warmth of peace, and a roomy heart

rooiboser
a white chocolate truffle w praslin of caramelized rooibos, a red bush tea from South Africa - no caffeine -notes of wood, honey and vanilla
Find yourself a cup; the teapot is behind you. Now tell me hundreds of things.    Saki

Assamer
velvety dark milk ganache topped w praslin of Assam Gold Tips grown in the Himalayan foothills: caramel & malt
I read the tea leaves / as if they were words / left over from a conversation / between two cups…
from “Lessons in Tea-Making” by Kenny Knight"

oolonger
creamy slow cooked caramel infused w Li Shan tea,  a green oolong from the mountains of Taiwan, where tea
leaves grow slowly , bottomed w a bit of praslin, the same tea, caramelized
You weren't to know how your touch/ with the teaspoon stirred me… from “Tea",   by Tiffany Atkinson

pu-erher
a sumptuous ganache made w wild dark chocolate, Cru Sauvage 68% from Beni, Bolivia and the most complex of all teas, a China red tea w microbial fermentation, pu-erh is good for the heart, just like chocolate!
I was on the roof / With a cup of red tea. / Looking at the moon / And counting the stars.
from Imagination by Tanzim Ahmed

this is the first ever flying noir vegan selection....

no cream, nobutter, tho this micro batch chocolatier does use simple equipment that can carry over traces

ADD TO CART
the V'aria box:
this is the first ever flying noir vegan selection....no cream or butter, tho as a micro batch chocolatier, simple equipment can carry over traces

satsumata
fresh satsuma mandarin zest praslin: caramelized, ground to be crunchy, combined w solid 58% bittersweet chocolate
Held in a late season / At a shifting of worlds …from A Reminiscence by Richard O. Moore 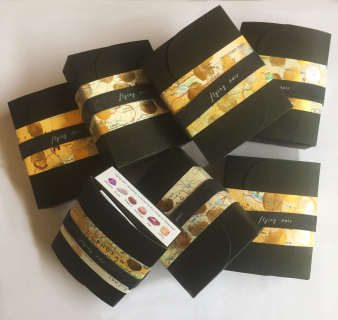 six bonbons - each a part of the story

​- all hand enrobed in chocolate -

74% dark from the Dominican Republic